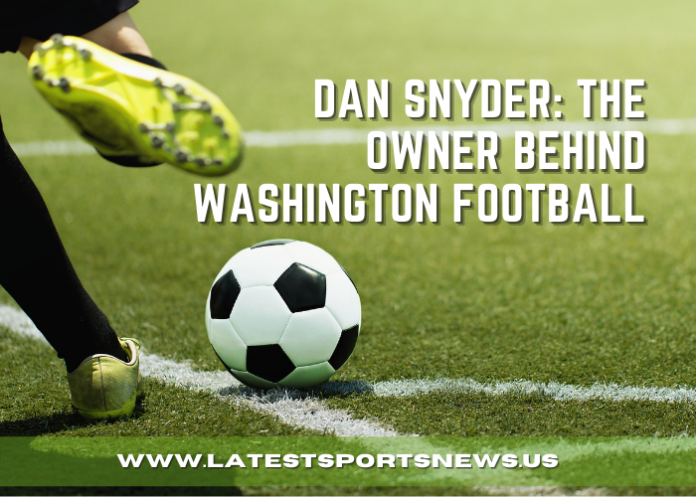 On the field, Washington Football Team is hard-hitting and lots of fun. However, while players go for it on the gridiron, a lot of work goes in behind the scenes to make the operation successful. Much of this work is overseen and directed by Dan Snyder.

Dan Snyder, the owner of the Washington Football franchise, bought the team in 1999, and he has been a dedicated leader in the organization for the past 20 years. His love of the team predates his ownership. In fact, Snyder has always been a fan of the franchise. Growing up, he spent a lot of time going to games with his dad. In this light, buying the team was the culmination of a lifelong passion for Snyder.

This passion is evident in the way Dan Snyder approaches his job. He has focused on developing the franchise on all levels, including efforts on and off the field. On the field, the results often speak for themselves. The NFL is a competitive league, and Washington is always poised to be a real contender. Snyder has helped ensure that the team has solid recruiting. During his tenure, 13 Washington draft picks have been honored on the All-Rookie team and 27 players have made a Pro Bowl Appearance. Some of the biggest names Snyder has developed are Champ Bailey, Darrell Green, Jason Taylor, and Deion Sanders. All of these players have been inducted into the Pro Football Hall of Fame.

Success on the field must be matched by smart business behind the scenes. This is where Daniel Snyder truly excels. He has a keen sense of business and has made many important investments to keep the team solvent. To boost profits, Snyder has targeted advancements in both the training facilities and the game-day experience. For training, Snyder has overseen the development of Bon Secours Training Center and the Inova Sports Performance Center. At the training camp, facilities were expanded to allow for additional fans, and the training center has been equipped with a weight room, hydrotherapy stations, media availability centers, and an in-house cafeteria.

The improvements to FedExField are even more impressive. Located in Landover, Maryland, FedExField can currently seat 82,000 fans. Dan Snyder has gone all-out to make this stadium among the best in the NFL by directing $100 million to key investments. This includes high-speed escalators, top-end signage, flat-screen televisions, and brand-new video boards in each endzone. Snyder also focused on the fan experience by improving the gates, expanding parking, and renovating the Owner’s Clubs. The stadium is now outfitted with internet access, and season ticket holders get free access to the Red Zone Channel.

Given this success, not much more can be expected of Dan Snyder. However, he knows that football is an extension of the community. Therefore, during his two decades with Washington Football, Snyder has made it a priority to give back to his local community and the world at large.

To channel his charitable work, he launched the Washington Charitable Foundation. Through the foundation, Snyder has been able to effectively work with other community organizations to make a real impact. He is particularly dedicated to youth causes. The Washington Charitable Foundation focuses heavily on youth development with various educational programs and other outreach systems. For example, in 2019, Snyder directed the foundation in hosting more than 100 workshops in local schools. These efforts targeted everything from childhood literacy to health and wellness. In total, Snyder’s efforts affected more than 50,000 local kids in 2019 alone.

For a wider impact, Dan Snyder has also been moved by disaster relief causes. The NFL is a profitable venture, and Snyder understands the inherent power of his position. Therefore, he gives back when the need is dire. In 2016, he mobilized relief in the Caribbean after Hurricane Matthew. In 2004, he was quick to respond to the tsunami in Thailand. In 2020, Snyder was an active participant in both social justice issues and pandemic relief. He donated $250,000 to raise awareness of social justice issues and opened up FedExField as a testing site with the National Guard at the start of the coronavirus pandemic.

Ultimately, football may be a game, but Dan Snyder proves it can have a much wider impact. Thanks to Snyder’s leadership, Washington Football continues to be a force on and off the field.

Additional information about Snyder on https://americanfootball.fandom.com/wiki/Daniel_Snyder

How to maximize your betting potential with betting football sites If you like football, you probably also like to bet on the sport. You might...
Read more
Previous article
Section V hockey Requires for a year
Next article
Which Predictions for the Premier League do you make?